On August 9th, Michael Brown, an 18-year-old African American was killed by Ferguson police officer, Darren Wilson. Minutes prior to the murder, surveillance cameras captured Mr. Brown with a friend taking some cigarillos from Ferguson Market and Liquors. Wilson says he received a call about this misdemeanor on dispatch and a rough physical description of the two men. Wilson found the two walking down the street and told them to move away from the street. An argument ensued and Wilson whipped around in front of them in his police SUV, blocking the street and nearly hitting them. Wilson then immediately shot Michael twice. Wilson could have sped away in his police car if he legitimately felt his life was in danger, but the 18-year-old was unarmed, so there was no reason for him to feel he was in any danger. After being shot, Michael attempted to flee. Wilson pursued him on foot over 100 feet with his gun and then executed the 18-year-old in broad daylight. He did not call for EMS, but instead left Michael bleeding on the street for four and a half hours while he and other officers cordoned off the street with police tape. The autopsy showed that Wilson had shot at Brown 12 times and he had been hit at least six times. 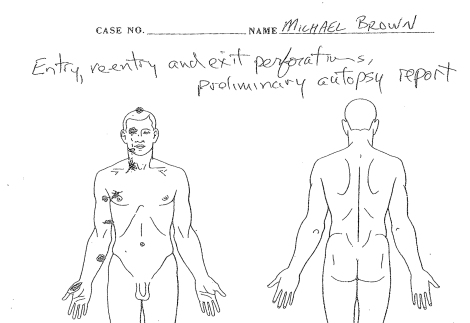 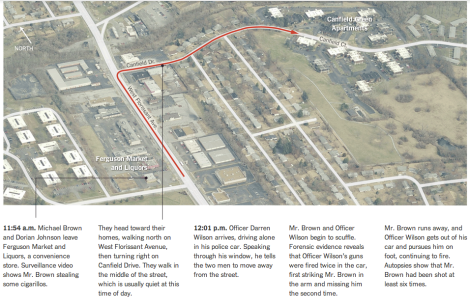 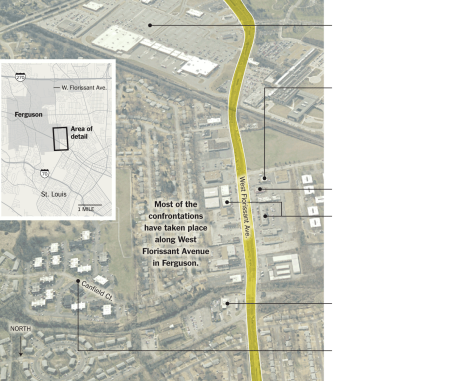 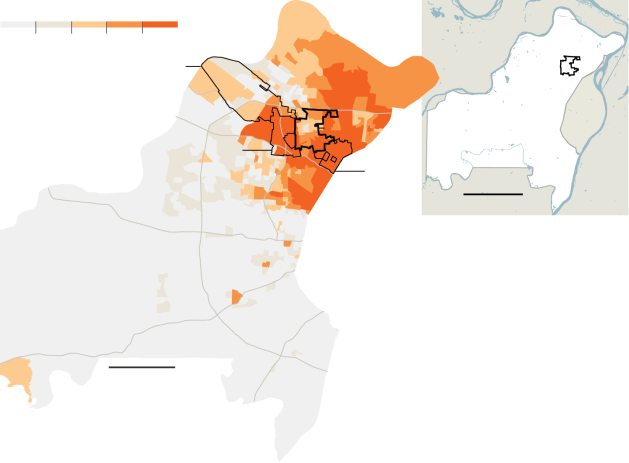 Here is Wilson immediately following the incident. He claimed Brown had been punching him, but he appears to be unscathed: 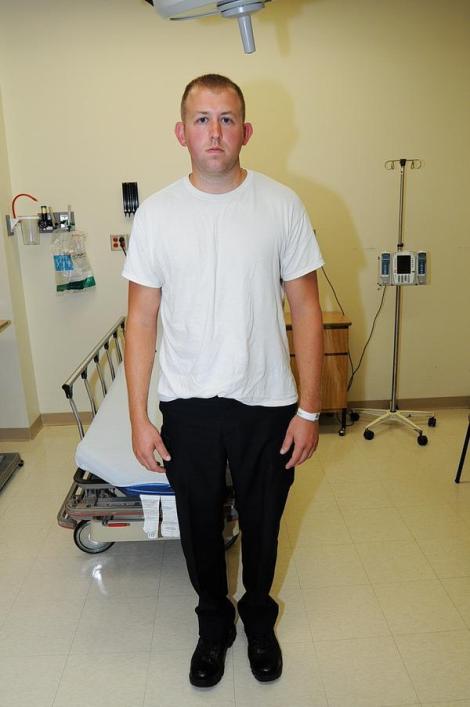 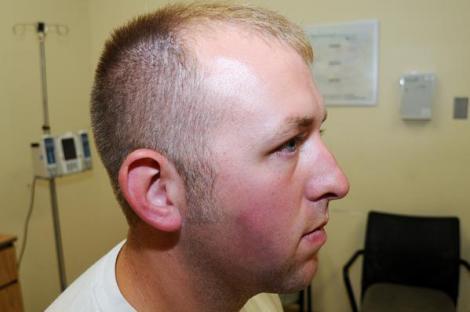 NBC, usually a sycophantic media outlet that cheerleads police reported that “Baden, a high-profile coroner-for-hire, performed one of three examinations of Brown’s body and concluded that he was shot at least six times. The last bullet fired — which struck the top of Brown’s head — killed Brown, according to Baden. Baden also said he had found no signs of a struggle between the black teenager and the white officer, Darren Wilson.”

Wilson resigned on Saturday, but so far has received no charges and he could feasibly kill again. The Grand Jury convened on this case was made up of nine Caucasians and three African Americans. The grand jury met in private, accompanied by two prosecuting attorneys. No one from the public knew what went on in these meetings, as is the convention with grand juries, until the entire Grand Jury minutes were published. Many of the witnesses were intimidated beforehand. Deandre Johnson, a possible witness to the shooting, was killed immediately after the Grand Jury made its decision public.

On November 24th, a St. Louis County grand jury decided not to indict Wilson. Bob McColloch, the prosecutor for the case, predictably made no attempt to charge Brown as prosecutors almost always side with cops. In fact, it was the fifth time in McColloch’s career that he helped killer cops avoid indictment. After ensuring a grand jury in 2000 didn’t indict an undercover police officer and a DEA agent for shooting and killing two unarmed black men in the parking lot of a fast-food restaurant in Berkeley, Missouri, McColloch added insult to injury, calling the deceased victims “bums” in front of the media. The intention of the charade of the Grand Jury on Michael’s Brown’s murder orchestrated by McColloch was to ensure the case never went to a criminal trial where it would be open to the public.

This wasn’t the first time Wilson was accused of misconduct. In fact, he was fired from the Jennings police department in 2011. The city council at the time voted to fire everyone in department for mass corruption and racial profiling. The St. Louis PD was put in charge instead and Wilson simply transferred to the St. Louis PD before killing Michael Brown.

Every proponent of police (cops themselves, their families, and friends) seek to whitewash Michael Brown’s murder. But this killing has brought national attention to police brutality in a way not seen since police murdered Rodney King. Too many like Michael Brown have been killed: Trayvon Martin, Tamir Rice, Kenneth Harding, and Oscar Grant to name a few were killed by police without cause or repercussions. We have seen too many children’s lives endangered and ended by police. Seven-year-old Aiyana Stanley-Jones was killed when she was sleeping by police:, yet the cop who killed her faces no charges.

St. Louis Police Chief Dotson told residents to stock up on food and water before the grand jury verdict. One could infer he knew the grand jury wasn’t going to indict and he knew there would be backlash. A line of police vehicles creeped through the town during protests after the verdict, firing tear gas randomly in all directions. St. Louis police twice established a no-fly zone over the city to avoid a record of their brutality. Gun sales spiked in the area immediately following Brown’s death, and some businesses boarded up their storefronts in an attempt to prevent looting.

The KKK have been vocal supporters of Darren Wilson, and this has been embraced by the St. Louis police department. Missouri has a high population of KKK members, and some are on the police force. Vice reported on November 13th “The Missouri chapter of the Ku Klux Klan is threatening to use “lethal force” against protesters in Ferguson who threaten their safety, equating some demonstrators to “terrorists”…masquerading as peaceful protesters.” They also said they have “awakened a sleeping giant.”

As more people recognize police killing as modern-day lynching, the KKK see police as a natural ally. The white supremacist group has, in fact, been raising money for Darren Wilson through Gofundme campaigns. Sympathizers have even been talking about the “emotional stress” Wilson must have felt.

Michael Brown’s parents are appealing to the UN in Switzerland, not just for justice their son, but for justice of victims of police brutality across the state.